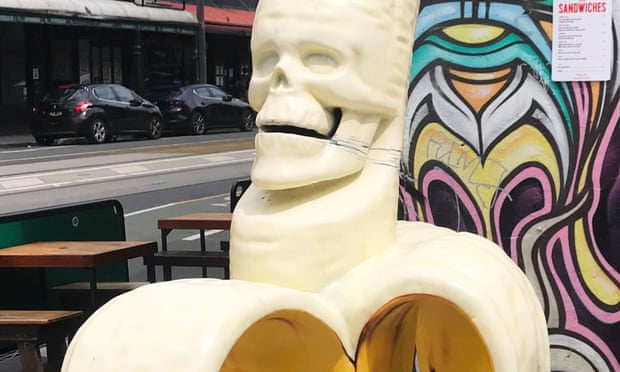 A 1.8-metre public artwork depicting an anthropomorphic banana has sparked controversy among Melbourne locals — and has already been vandalized.

Fallen Fruit is the title of the piece, which shows a scary skull gazing out into Rose Street in Fitzroy. It was erected on November 8th and acquired for $22,000 by the City of Yarra with a $100,000 grant from the Transport Accident Commission (TAC).

The banana was vandalized with a saw on Thursday night, apparently in an effort to decapitate it.

“It was surprising and upsetting to see the work vandalised in such a dramatic way, but there’s not much that can be done when the work is in the public arena,” the artist Adam Stone told Guardian Australia on Friday afternoon, before patching up the wounds. “You just have to let go and throw it out there.”

Stone is a graduate of the Victorian College of the Arts and a previous recipient of the Montalto Sculpture Prize and the Fiona Myer Award. His banana-themed artwork is part of a larger body of work that has been shown in galleries in Australia and Asia. “My ambition was that people from a variety of backgrounds could find the work fun and engaging, and… perhaps consider the conceptual meaning of the work,” he stated of Fallen Fruit.

“I was thinking about how western society’s hubris and obsession with unsustainable excess affects the environment.”

While it’s unknown what prompted the destruction, the public’s reaction to the banana’s plea has been mixed. Some swiftly defended the artwork on social media, with many making references to the series Arrested Development, whose principal family runs a frozen banana store.

Others, on the other hand, saw the enormous fruit as ripe for criticism, especially because of its expensive taxpayer-funded cost, which some felt should have been better spent on other community activities and enterprises.

The Transport Accident Commission, which awarded the $100,000 grant to a Yarra Council initiative to protect pedestrians, said that in the future, they will be more clear in their expenditure criteria.

“Were we aware that a piece of banana art would be included in the project?” “We weren’t,” Samantha Cockfield, the TAC’s head of road safety, told 3AW on Friday.

“We’ll make it clear… that large pieces of public art aren’t really what we’re in there for,” says the artist.

Stone’s sculpture is the latest in a long series of contentious yellow works.

Vault, Ron Robertson-highlighter-hued Swann’s edifice, was highly panned in 1980 because to its intimidating scale and color. It was dubbed the “yellow peril” and was taken down from its original City Square position less than eight months after it first opened.

Fallen Fruit’s price tag also pales in contrast to its forerunners, such as Italian artist Maurizio Cattelan’s $120,000 piece Comedian, which included a banana duct tied to a wall and generated a commotion at its Art Basel debut in 2019.

Thanks to Michael Sun at The Guardian whose reporting provided the original basis for this story. 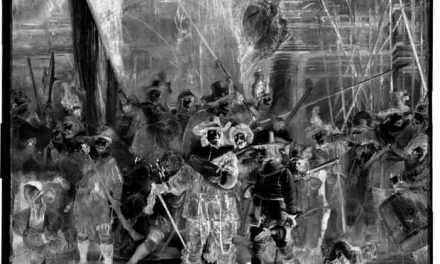 Rembrandt’s The Night Watch Has a Hidden Sketch