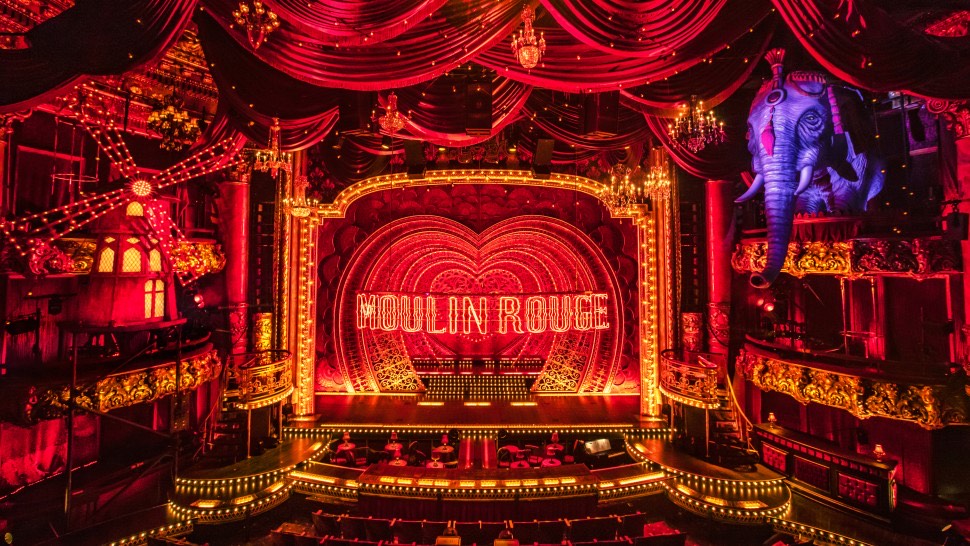 These two guys might be about to win a Grammy. Here’s why.

We had a chance to chat with some of the incredibly talented team behind Moulin Rouge!, including Music Supervisor / Orchestrator Justin Levine, and music producer Matt Stine.

Matt and Justin shared some interesting information about their process and what it takes to help create the music behind an award-winning production.

Can you remember the first meeting the rest of the MR creative team? What were the first steps of working on MR production?

Matt: This is an easy one because I’ve been fortunate enough to have been working with our Director, Alex Timbers and our Music Supervisor, Justin Levine for years and years.

We first collaborated on the David Byrne/Fatboy Slim musical, Here Lies Love, and we’ve been working together on various projects ever since!

So when Alex and Justin got going on Moulin Rouge! The Musical it wasn’t long before they called me up to ask if I wanted to join them and of course I couldn’t have been more thrilled to be a part of it.

Justin: My first meeting was with Alex Timbers, our director, and John Logan, our book writer.

We spent a weekend in a hotel room, mapping out the plot and we spotted in musical moments as you would in an original musical.

It was both exciting and educational to watch John, a veteran of the silver screen, adapt an iconic film for the stage in real-time as Alex brought his uniquely analytical mind to the work. I sat there furiously taking notes and imagining all of the ways in which we could bring Baz’s brilliant vision and score to life on a stage with completely different tools.

It’s crazy to think that just 3.5 years ago we were sitting in that hotel room and now it is on stage 8 times a week, performed by our beautiful company.

‬
What has been the biggest pleasant surprise of working on / putting on this production?

Justin: The biggest pleasant surprise of working on this show was meeting some of the most incredible souls I’ve ever known.

Matt: I think it’s great to hear how many people have really recognized how the music really is the thing that fuels the engine of this show.

Justin Levine’s reimagining of the score is so inventive, so clever in its use of pop lyrics to tell the story, but it’s also so much fun and it’s been thrilling to see how audiences have connected with it.

What is your favorite moment in MR?

It’s one of the moments where music, dance and design tell the story in such an invigorating way.  ‬

Matt: There are so many thrilling moments but I really love it when Satine sings “Firework” early in act one.

I think it says so much about our show that you can take a pop song that most people have heard a million times by now and transform it into a powerful “I Want” ballad that delivers real emotional impact.

Of course, it helps to have a genius performer like Karen Olivo to deliver the number!‬

Where were you when you learned of the Grammy nomination?

Matt: Naturally, being a New Yorker who lives on the upper west side of Manhattan, I was at the bagel shop buying my breakfast.

Not just any bagel shop, Absolute Bagels up on Broadway which makes the best bagels in NYC.

I got a congratulatory text from a friend as I was paying for my Everything Bagel with Scallion Cream cheese…..what could be more perfect?

Justin: ‪I was in bed! It was sort of a surreal moment, to be honest. I was so shocked that I sat there for a moment and promptly went back to sleep, imagining I’d wake up and it wouldn’t have been real. ‬

What is next for you?

Justin: I’m one of the writers of an adaptation of S.E. Hinton’s The Outsiders. I’m writing it with Jamestown Revival’s Zach Chance, Jonathan Clay and the brilliant Adam Rapp. Liesl Tommy is directing and the team has quickly become a family.

We go to Chicago this summer at the Goodman Theater. ‬

Matt: I am currently producing another original Cast Album for The Public Theater…a wonderful show called Soft Power with music by the brilliant Jeanine Tesori.

I am also producing a fantastic anthology album of the works of Elizabeth Swados that I’m very excited about.

And one more thing! In the spring I’ll be Sound Designer of a new production of Stephen Sondheim’s Assassins, directed by John Doyle.