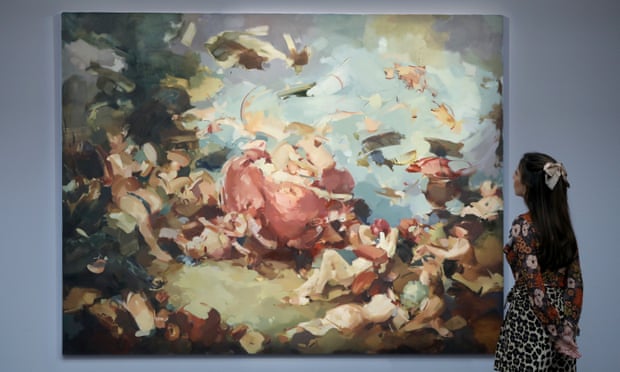 Don’t bother with the Young British Artists. The YBAs of the late 1990s and early 2000s, made famous by Damien Hirst’s pickled cow and Tracey Emin’s unmade bed, are being displaced by a new generation of artists.

The attention and money are now focused on the Young British Painters, with some of their works fetching more than £1 million per canvas. Not only are they young – approximately 30 – but the majority of them are women, and many are black.

I’ll Have What She’s Having, a painting by Flora Yukhnovich, 31, sold at auction for £2.3 million only a few days ago. Despite this, the recommended price was just £80,000.

Yukhnovich is influenced by Rococo painters of the 18th century. “I want people to experience that a-ha” moment — a sense of familiarity that allows them to access a work,” she explains.

Another artwork, Myths of Pleasure, by Jadé Fadojutimi, a 28-year-old black artist, sold for £1.2 million, while her The Barefooted Scurry Home sold for more than £800,000. Two dozen of her sculptures will be on display at the Hepworth Wakefield gallery starting in April 2022, making her the youngest artist in the Yorkshire venue to be awarded her own show.

“Of course, auction prices are now staggering,” says Pippy Houldsworth, who manages Fadojutimi’s Mayfair gallery. “The market is irrational, with collectors with huge resources seemingly having no upper limit. It’s also been very hard to get a work by Jadé over the previous two or three years.” Hundreds of people are on the waiting list.

The Pippa Houldsworth gallery focuses on female artists. “For far too long, they have been ignored and underrepresented,” she argues. “However, they now have powerful voices.” Take a look at the recent auction records for young artists, and you’ll see that they’re almost all made up of women.”

Paintings appeal to more than just collectors. Consider the success of two major exhibitions presently on view in London: the Royal Academy’s annual Summer Exhibition (held this fall, post-Covid) and the Hayward Gallery’s Mixing It Up, which features the work of 31 contemporary UK-based artists. Both displays, which are bursting with brilliant colors, have received critical acclaim and are drawing enormous crowds.

Some of the artists at the Hayward are well-known, such as Peter Doig and Rose Wylie, but the majority are lesser-known, such as Fadojutimi, as well as other thirtysomethings such as Louise Giovanelli, who works in Manchester, Kudzanai-Violet Hwami, who was born in Zimbabwe and raised in South Africa before moving to the UK, and American-born and now London-based Issy Wood, whose work Eggplant/

The Hayward’s director, Ralph Rugoff, points out that more than half of the paintings in his show are by women. “However, if I’d put this show on 30 years ago, it would have primarily featured white, male, English-born artists.” My impression is that the public and consumers like what I refer to as painting’s magical aspect — the interplay between color and size.”

The head of the Royal Academy Schools, Eliza Bonham Carter, agrees. “Perhaps there is a need for something cheerful in these troubled times. During the shutdown, individuals went online to look at art and found it simpler to gaze at artwork.”

One of the Mixing It Up artists, Rachel Jones, went on the RA Schools postgraduate course and talks of “the emotional opportunities of color, and how color communicates.”

Rugoff points out that many of these young artists were discouraged from sketching and painting in school and art college since these talents are generally seen as bourgeois. “They have triumphed in the face of adversity.”

It’s also fascinating that, despite the difficulties of Brexit and Covid, there are so many excellent young artists working in the United Kingdom. Rugoff draws a parallel between Liverpool pop music in the 1960s and Manchester pop music a decade or two later.

“Like back then, this is one of those times when people seem to congregate in one place, then inspire and encourage others with similar abilities.” This generation of painters is equipped with all of the necessary painting equipment and is well-versed in color theory. They also handle the canvas as if it were a runway.”

Ironically, since that Covid has weeded out several smaller galleries, it is the bigger galleries with power and funds that have been scooping up and pushing much of this new painting talent.

Is this rebirth in painting, however, a transitory fad? “Well, painting has been declared dead before,” argues Bonham Carter, who is also a painter. “But it’s always been resurrected,” says the narrator.

Tell that to the Turner Prize jury, who have mainly neglected painting for the last decade and more. This year, they purposefully selected five distinct collectives for their much-maligned shortlist. Are they aware of the Young British Painters’ present enormous success?

Thanks to Richard Brooks at The Guardian whose reporting provided the original basis for this story.