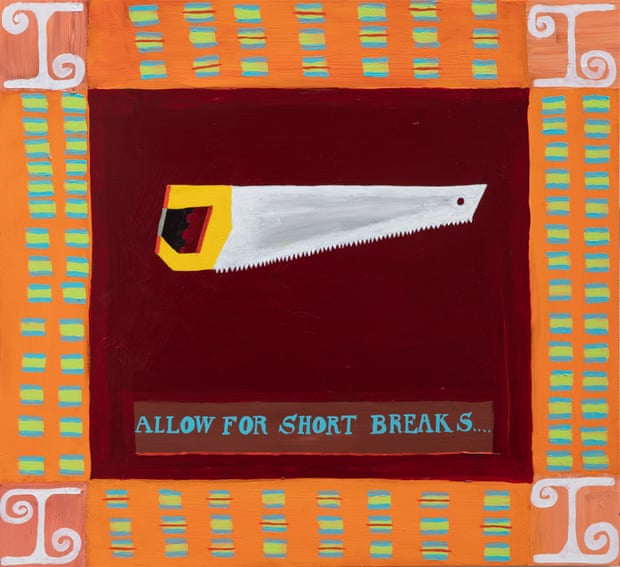 Those Tate Modern wags! They’ve been telling you for 21 years that figurative painting is dead: 21 years of video projections, dancing, and men yelling at monitors. Then they show a retrospective of an old-school figurative painter and tell us that this is what contemporary looks like today.

Lubaina Himid’s show at the Blavatnik Building, where time and performance-based art generally reigns supreme, is replete with the type of cheerful postmodernist pop seen during the Royal Academy Summer Exhibition. In line with its intimidating industrial size, this museum portrays a dark and apocalyptic feeling.

This artist, on the other hand, is all about whimsy. She begins her retrospective with a series of paintings depicting do-it-yourself projects. A manual’s safety precautions are written next to drawings of cogs, nails, and tools.

These instructions are echoed on surrounding speakers in one of numerous sound art installations Himid has produced with Magda Stawarska-Beavan. It reminds me of a softer version of Jasper Johns. And it turns out that the whole thing is about as risky as a hammer painting. It doesn’t make the transition from art to life.

Early on, the sound work seems to be meant to persuade us that Himid is a wonderful match for Tate Modern. But she’s no more contemporary than David Hockney, who is, in his own way, quite modern. The similarity isn’t haphazard.

Himid seems to have been a great Hockney admirer when she first began her painting career in the 1980s. Ankledeep (1991), with its two pairs of nude feet lying on a splashy spume of blue and white brushstrokes right out of one of his early 1960s works, shows his influence.

In Himid’s 1984-6 piece A Fashionable Marriage, Hockney appears with the dyed blond hair he had in the 1980s, seated with a guy on his lap. This Hogarth-inspired tableau seemed furious and sardonic when it was displayed at the 2017 Turner Prize (which she won) in Hull. It is tamed here, among all of her artworks.

It turns out that it’s a manifestation of Himid’s interest in story art. Her 2016 cycle Le Rodeur, named after a French slave ship, employs Hogarth’s concept of a “progress,” a visual tale presented via many pictures. Le Rodeur: The Cabin, situated aboard a ship, is notably Hogarthian, with an 18th-century musician playing fife and drum and a waiter bringing on a jelly.

In 1819, the crew of the Le Rodeur tossed 36 enslaved west Africans overboard. Himid’s works are unaffected by the occurrence. Instead, it’s a faint pain in the background, something her characters may be avoiding or quietly contemplating. If this were a play, there would be many pauses.

In a painted inscription next to a collection of pots made from jelly molds and decorated with historical images, symbols, and styles, Himid asks, “What is a monument?” It’s an excellent question. Her work is about recollection, but it’s in a strangely meandering manner. It is haunted by historical anguish, yet the calm figures and bright colors preserve their serenity.

After a time, you’re ready for a big bang. I wanted a video of a performer smacking my face and yelling at me. This is all just too simple and courteous.

The contrast between Himid’s art’s political and historical topics and its refinement might be quite striking. Rather, meaning is reduced to a sliver of metaphor. OK. When you realize it’s about slavery, the sea in all of Le Rodeur’s scenes is menacing, and the actors’ tranquility is unnatural. However, the photographs themselves do not show this.

Paintings of utopian structures, carpets, and near-abstract patterns are also shown. Himid is enamored by her hues. In a room filled with constructivist configurations of musical instruments, newspaper (this one), and book covers, all shot through with lacings of blue, a sound piece continues repeating the word “blue” in several languages.

She’s brilliant as a colorist, but as a painter of people and places, she’s much too hazy. In pubs or living rooms, we see properly prepared, elegantly clothed people meeting, yet each detail is like a quote of a quote.

If Tate Modern believes that painting has reached its pinnacle, it must consider why certain paintings are just ornamental while others are meaningful. There’s nothing here to justify why this accomplished and quirky, but not particularly ground-breaking painter belongs at Tate Modern while others of her age are content with a display at the less glamorous Tate Britain.

I’ve always been curious as to what this museum considers “modern.” It comes out to be whatever is trendy, and if the wind is blowing towards painting, don’t say Tate Modern isn’t blowing as well. 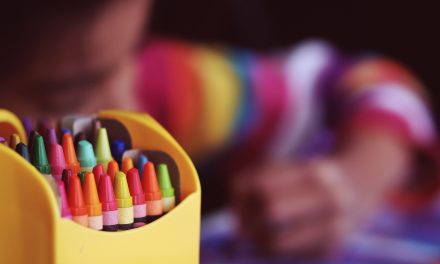 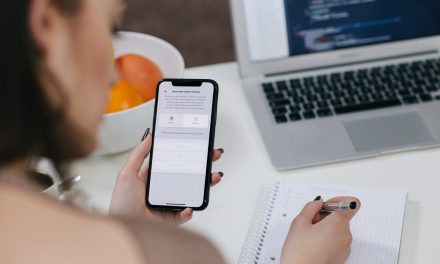