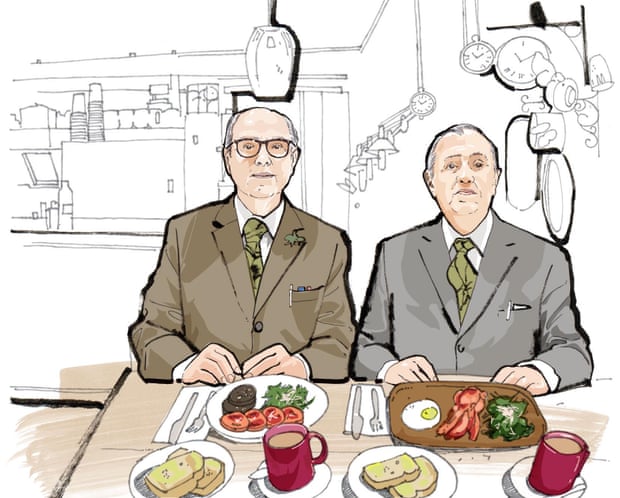 Gilbert and George had been painting the words “Oh My God” in caps on 50 poster-sized boards for the Serpentine Gallery since 7 a.m. when I knock on their home door in London’s Spitalfields. Of course, they’re dressed up and take me down the dark corridor of their home, George in front, Gilbert in behind, to the spacious, spotless room where they work.

They’ve been renting the half-derelict bottom floor for a modest £12 per month since 1967. The Queen Anne buildings, constructed for Huguenot silk weavers, had become homes to Jewish tailors and their workshops, but the rag trade had moved to the Far East, and it was the cheapest location in London at the time.

The neighborhood has become a byword for attentive repair, not least because of the artists’ unique presence, and houses sell for £5 million.

Gilbert Prousch and George Passmore, both in their late 70s, are two of London’s most renowned creatures of habit. They’re up early in the morning giving out cups of tea to the homeless who walk down Brick Lane or sleep on the benches in Nicholas Hawksmoor’s Christ Church’s cemetery.

They salute each other before getting to work, along with their 28-year helper, Yigang Yu, whom they met at an exhibition in Shanghai in 1993 and brought home. They’re ready to go for lunch by 11.30 a.m., today with me in tow.

They’ve never kept food in the home, but they were compelled to replace the champagne in their fridge with at least a little cheese and ham during the epidemic when neighbors gave them meals. The idea of crumbs in their workspace makes them shiver.

For the last 30 years, I’ve had lunch at the Market Cafe, which is located at the far end of the street. The cafe’s sign is all that is left now. George remembers, “It was really us and the traders from the fruit market [now also closed].”

“A chorus of ‘Oi Oi’ would greet us as we entered. They seemed to be tribal.”

Their new favorite hangout is Nilly’s, a Turkish café on the gentrified Spitalfields market’s far side. They point at landmarks on the way there, and passers-by point to them as well, landmarks in lockstep.

Walking has always been an important part of their work. They used to walk the four or five miles to Highgate or Crouch End every evening.

They created Instagram video of “Our New Normal Walk,” which included synchronized promenades around their studio tables, while they were under lockdown. They don’t travel much farther these days than William Blake’s tomb in Bunhill Fields or the Mangal 1 restaurant in Dalston, where they spend their evenings.

Their research consists on walking. They shoot graffiti and seek for unusual new pictures of street life to include in their montage prints, such as canisters of clubbers’ laughing gas and ladies dressed in burqas.

“Like we always say,” George adds, “spend an hour at Liverpool St station if you want to know everything there is to know about the world.”

They recall the very first Indian eateries on Brick Lane. “Back then, it was just us and Bangladeshi men who hadn’t yet brought their families over, as well as the cops who came in for a takeout.” Tramps would take food from your plates and flee because it was so rough.”

Nilly’s is an open-fronted café packed with hi-vis jacketed construction workers. We take a seat in one of the corners and the couple orders their usual: bacon, egg, and spinach for Gilbert, and black pudding, fresh tomatoes, and spinach for George.

Gilbert adds, his accent inflected by his postwar upbringing in Austria, “The greatest English invention is cooked breakfast.” “They used to be Italian,” George adds, “but now all the good cafes are Turkish.”

They admire the café owner’s ability to transform himself into a living sculpture. “In Berlin, there is an old civilisation’s doorway. I believe it is Sumerian, with lovely bearded people on each side. He has a striking resemblance to them.”

Sitting with them, you get the feeling that their performance art has evolved into something much more emotional and amazing over the last six decades. We discuss how it all began, when they met at art school and fell in love the same year that same-sex partnerships became legal.

“We really wanted a studio, but we couldn’t afford it.” As a result, we came up with the notion that we might be the art,” Gilbert explains.

Hearing Flanagan and Allen perform their music hall classic, Underneath the Arches, was a watershed moment. “We found this record and came back and played it over and over in our little flat and thought, ‘Oh my God, this is us!'” he recalls.

We were living under the railway arches, aspiring to be artists.”

They devised the concept of a “singing sculpture,” in which they sat stiff-suited and blank-faced while performing the song on a loop. “We came up with the idea of erecting a small tent in Trafalgar Square and charging people to enter,” George explains.

They then landed a job singing for eight hours at a time at a gallery space in Düsseldorf. Then they went to New York, and they didn’t look back.

They claim they were fearless back then and today because they had each other and nothing to lose. “There was a lot of animosity.” “We’re still doing it nonstop,” Gilbert says.

“We turned ourselves into outcasts.” We were never a part of the art world. “We never wanted to eat lasagne in other people’s houses,” George adds.

Liberation and success go hand in hand. George recalls the thrill of discovering homosexual bars in Hampstead when he first arrived in London from Oxford, having grown up in Plymouth. They saw the mainstreaming of performance art in the 1970s.

“We used to go to the Blitz club and meet people like Boy George and Steve Strange,” George recalls. “At first, we would sit upstairs and gaze down at the dance floor, wondering who these strange-looking individuals were.

We assumed they were the offspring of Latin American tyrants or something like. When we questioned one, he claimed he worked in a Croydon pram store.”

The scatalogical mockery of religion’s homophobic “thou shalt nots” has been a recurring subject in their work. “It was an elderly vicar who knocked on the door recently,” George adds. “An elderly guy who is extremely nice.

‘I simply wanted to tell you that I believe your concept of outlawing all religions is fantastic,’ he added. ‘I don’t want them to be religious; I want them to be nice,’ I constantly tell my congregation.’

Gilbert adds, “We like to think we’re in the service industry.”

What kind of service do you provide?

“We think of it as speaking to people’s moral dimension,” George adds, perhaps referring to the Spunk Blood Piss Shit Spit pieces.

They’ve been photographing themselves beaten up and dishevelled against their London streetscapes throughout the epidemic. They’ve felt the year’s extremes firsthand, not least because their street has been lined with funeral processions to the mosque up the road every day.

George is now reading London Marches On, a book on the capital’s history between the wars. They saw themselves as survivors, as war babies who have survived through Aids, as stable points in a world of complexity and change.

They tell me about a £10 million permanent exhibition of their art that they are renovating in a nearby brewery building as I walk home after lunch. The room is partly intended as a personal response to the art establishment’s “intolerant liberals” who refuse to welcome them, according to George (they supported Brexit, for one thing).

The second reason is a lot more straightforward. “It’s so we can stay here indefinitely,” George explains.

We make our way back along Fournier Street. A sundial from the 1740s hangs on the high wall of the mosque that was first a synagogue and then a church.

We are shadows, as “Umbra sumus” says. Gilbert and George say their polite goodbyes, shut the sturdy door behind them, and go back to work, like they always do. 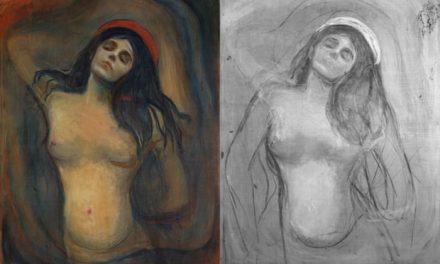